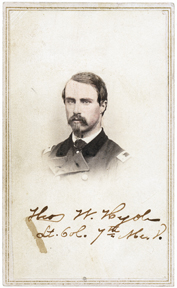 One hundred and fifty-five years ago today, in the fields and woods near the town of Sharpsburg, Maryland, Union and Confederate forces fought the Battle of Antietam. It remains the country’s bloodiest single day of combat. One of the regiments involved was the 7th Maine. At Antietam it was commanded by Major Thomas Hyde, a young graduate of Bowdoin College. In his memoirs, Following the Greek Cross or Memories of the Sixth Army Corps, Hyde recalled his experiences on September 17, 1862. Late in the day, near five o’clock, Rebel sharpshooters were harassing a Maryland battery from behind haystacks at the Piper farm. Hyde’s brigade commander, William Irwin, ordered Hyde to take the 7th Maine and clear the snipers out. Hyde had just seen a large body of Rebels move into that area, and informed Irwin of the fact.

“Are you afraid to go, sir!” Irwin barked. Hyde later came to believe he was drunk. (“He was a gallant man, but drank too much, of which I was unaware,” Hyde later wrote.) He asked Irwin to repeat his order so that the whole regiment could hear it. Irwin did. Hyde had no choice but to obey. He assembled his men and sent them into motion.

Of the 166 enlisted men who made the charge, Hyde reported 12 killed, 60 wounded, and 16 missing. He counted three of the 15 officers as killed, seven wounded, and two missing. “I suppose I was fired at in that battle a thousand times, and what saved me was that Providence knew that I was an only son and my mother was a widow,” he wrote home.

That night, Hyde and his surviving officers wept over the regiment’s losses. “We had the consolation of knowing that we had gone farther into the Rebel lines than any Union regiment that day, that we had fought three or four times our numbers, and inflicted more damage than we received, but as the French officer at Balaklava said, ‘It is magnificent, but it is not war.’ When we knew our efforts were resultant from no plan or design at headquarters, but were from an inspiration of John Barleycorn in our brigade commander alone, I wished I had been old enough, or distinguished enough, to have dared to disobey orders.”