When war broke out in April 1861, patriotic Mainers rushed to enlist in the effort to end the rebellion. The 1st Regiment, Maine’s initial contribution to the conflict, was organized 16 days after Sumter’s surrender, with Col. Nathaniel Jackson of Lewiston in command. It was a 90-day regiment and never saw combat, although some of its soldiers reenlisted in the 10th Maine and later the 29th. One of its soldiers was John Mead Gould, a bank teller in Portland who wrote a history of the regiments.

Delayed by measles (which meant the 2nd ME left the state before the 1st did), the green soldiers departed from Portland on June 1 for a leisurely trip south, with stops for celebrations in Newburyport, Massachusetts (the birthplace of their colonel), Boston, and New York. Gould later wrote a very droll account of Col. Jackson’s “speech” in New York. Jim the adjutant was James Fillebrown, later the lieutenant colonel of the 10th ME. The “speech” became the subject of recurring humor in the regiment, where a cry of “Jim!” was certain to create hilarity.

Before leaving the Park, and while we were formed as a square, the Colonel delivered that famous speech which no man who heard will ever forget. It was entirely extempore and had the merit of brevity, and it made, not the orator, but the one addressed famous ever afterward. The Adjutant was hastening toward the opposite side of the square when the Colonel called him. The Adjutant did not hear—the only man in the regiment that did not, by the way. He called again and still no attention except from the 700 men and seven times 700 spectators who were all attention. Therefore he roused himself for his effort, and delivered the speech, which was taken down in short hand or some other way, and is recorded as follows: 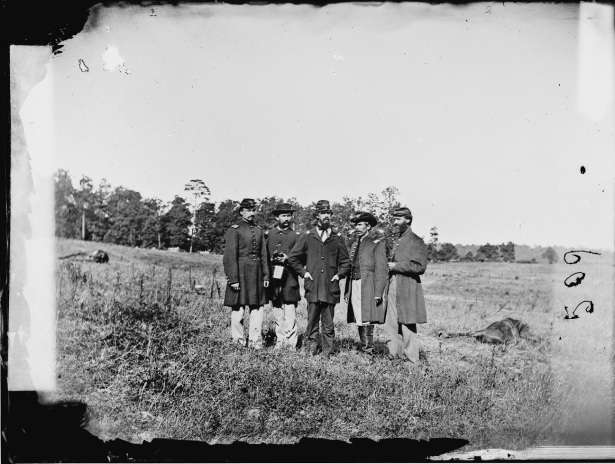 The 10th Maine Volunteer Infantry had its baptism of fire at the Battle of Cedar Mountain on August 9, 1862. The regiment was part of Nathaniel Banks’ corps of John Pope’s Army of Virginia, and it belonged to the brigade commanded by Samuel Crawford. At Cedar Mountain, Banks took on his old adversary from the Shenandoah Valley, Thomas “Stonewall” Jackson, even though the Rebels outnumbered him two-to-one. Despite the disparity in numbers, the fortunes of war first appeared to favor the Union, but ultimately the Confederates prevailed and drove the Federals from the field.

In his history of the 10th Maine, John Mead Gould provided an interesting perspective on Civil War combat. It was a deadly serious business, but when viewed objectively, it offered some hints of the ridiculous, at least in Gould’s narrative.

It is a sad thing to refer to, yet in glancing along the line the sight was ludicrous in the extreme. All were excited and were loading and firing in every conceivable way. Some were standing, but most were kneeling or lying down. Some were astraddle their pieces and were ramming the charge totally regardless of the rules on that point. Many had poured their cartridges upon the ground, and were “peddling out” the lead with more speed than accuracy I fear. We all took this occasion to swear at and gibe our friends in gray to the best of our ability. So with the din of musketry and the one common yell of friend and foe, it seemed as if bedlam was loose.

The behavior of those who were hit appeared most singular, and as there were so many of them, it looked as if we had a crowd of howling dervishes dancing and kicking around in our ranks. The bullet often knocks over the man it hits, and rarely fails by its force alone to disturb his equilibrium. Then the shock, whether painful or not, causes a sudden jump or shudder. Now as every man, with hardly an exception, was either killed, wounded, hit in his clothes, hit by spent balls and stones, or jostled by his wounded comrades, it follows that we had a wonderful exhibition. Some reeled round and round, others threw up their arms and fell over backward, others went plunging backward trying to regain their balance; a few fell to the front, but the force of the bullet generally prevented this, except where it struck low down and apparently knocked the soldier’s feet from under him. Many dropped their musket and seized the wounded part with both hands, and a very few fell dead.

Edwin Forbes sketched a view of the August 9, 1862 Battle of Cedar Mountain (Library of Congress).

The enemy were armed with almost every kind of rifle or musket, and as their front exceeded ours three times, we were under a cross fire almost from the first. The various tunes sung by their balls we shall never forget, and furthermore shall never confound them with any others we have heard. In a moment, when curiosity got the better of fear, I took notice of. this fact, and made record of it in my diary a day or two afterward. It was at a moment when probably a fresh regiment had arrived on our right, for the mass of missiles were coming across our line at an angle of forty-five degrees. The fierce “ zip “ of the swift Minié bullet was not prominent by comparison, at that particular moment, though there were enough of them certainly. The main sound, or the air of the tune, if I may be allowed the expression, was produced by the singing of slow, round balls and buck shot fired from a smooth bore, which do not cut or tear the air as the creased ball docs. Each bullet, according to its kind, size, rate of speed and nearness to the ear made a different sound. They seemed to be going past in sheets, all around and above us.