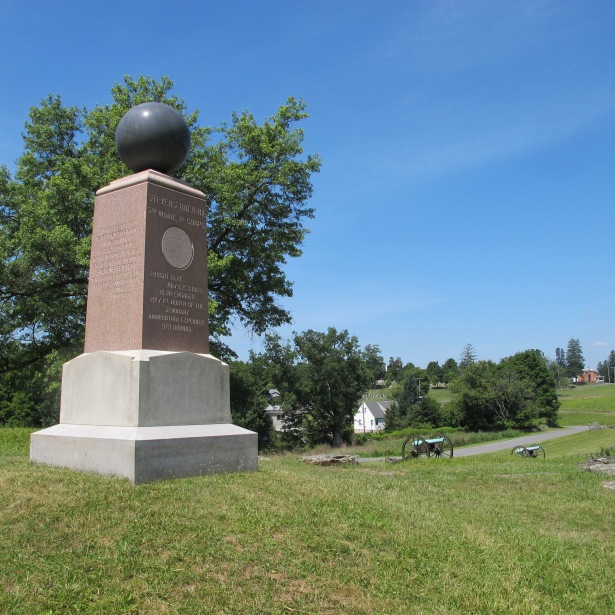 The 5th Maine Battery (Stevens’ Battery) on Stevens Knoll at Gettysburg. Charles O. Hunt never made it this far, having been wounded before the battery retreated to this point. You can see the Evergreen Cemetery gatehouse in the background. (Tom Huntington photo)

One of the joys of historical research is coming across great stories from the past. That happened to me many times while I was researching Maine Roads to Gettysburg (due out next spring from Stackpole Books). I discovered one of those stories in the George J. Mitchell Department of Special Collections & Archives at Bowdoin College. The collections there include two thick, hand-written volumes that once belonged to Charles O. Hunt, Bowdoin class of 1861. I submitted Hunt’s account of his Gettysburg experiences to Civil War Times, and the magazine published it in the July 2017 issue. You can read the full account by clicking here.

Hunt was a lieutenant with Capt. Greenlief Stevens’ 5th ME battery. When he reached Gettysburg, it must have felt a little bit like coming home. Hunt was from Gorham, Maine, and had been a senior at Bowdoin when the war broke out. Many of his classmates enlisted, but Hunt wanted to complete his studies. After graduation, he spent time with his sister while he pondered his future. His sister, Mary Carson, was living in Pennsylvania, in the crossroads town of Gettysburg where her husband, Thomas, was a clerk for the Bank of Gettysburg. Hunt stayed with the Carsons from September until the end of 1861 and became very familiar with the town and the surrounding countryside. He climbed the Round Tops, rode across the yet to be capitalized wheat field, and collected hickory nuts on Culp’s Hill.

Hunt decided to fight for the Union, and he joined the Fifth Maine Light Artillery, then under the command of George Leppien, a Pennsylvanian who had received military training in Germany. Leppien was mortally wounded at Chancellorsville, and command of the battery fell on Capt. Greenlief Stevens. As the battery made its way north through Pennsylvania on July 1, Hunt joked to Stevens that if he were to get hit, he hoped it would happen in Gettysburg, because he knew people there would take good care of him. He soon learned that you had better be careful what you wish for.

Read the article to find out what happened next.

Hunt’s wartime adventures were not over. He recovered from his Gettysburg wound and returned to the 5th Maine Battery, but he was captured outside Petersburg in 1864. Later that year he attempted to escape from Camp Sorghum, his prison camp in South Carolina, with Charles Mattocks of the 17th Maine and Julius Litchfield of the 4th Maine. Taking advantage of the guards’ laxity in allowing men to forage unsupervised for firewood in a nearby woods, the three men left the camp on November 3 and set their sights on Knoxville, Tennessee, in Union-held territory about 200 miles away. They had a crude map of the region, and E.A. Burpee of the 19th Maine had loaned then a compass. Their journey was fraught with danger and required swimming across a river, traveling at night, and finding concealed places in the woods to sleep during the day. They would not have made it if it weren’t for local slaves, who supplied them with food and shelter. “We never met one who showed any disposition to betray us to the whites,” said Hunt. On November 8, election day back home, the three men held their own election and voted unanimously for Abraham Lincoln. After two more weeks more of travel, with the men achingly close to Tennessee, their luck ran out and they were captured and sent to a prison in Danville, Virginia. On the way, they heard the news that William T. Sherman had captured Atlanta and was on his way to the sea.

After the war, Hunt studied medicine and became the superintendent of Portland’s Maine General Hospital, a position he held until just before his death in 1909.

One thought on ““I Felt a Sharp Sting””