After years of saying I was going to look into my family history, I finally took the plunge a few weeks ago and signed up for Ancestry.com. It didn’t take me long to find out that I have two direct ancestors who fought in the Civil War. Both of them fall outside the scope of my book, Maine Roads to Gettysburg. One of them served in a Maine regiment but enlisted too late to fight at Gettysburg. The other soldier was quite possibly at Gettysburg, but he served with a Massachusetts unit.

The Maine soldier was my great-grandfather. Daniel True Huntington was an 18-year-old farmer from Litchfield when he enlisted as a private in the 31st Maine in March 1861. His service record notes that he was five feet, five inches tall, had a fair complexion, dark eyes and brown hair. His regiment entered the war in time to participate in Ulysses S. Grant’s brutal Overland Campaign as part of the second brigade, second division of the IX Corps. It fought in the battles of the Wilderness and Spotsylvania, was under fire during Cold Harbor, and took part in the movement across the James River toward Petersburg. There the 31st Maine fought in the misbegotten battle of the Crater, where it had 10 killed, 31 wounded, and 47 captured, including its colonel. By the end of September 1864, only about 60 members of the regiment were able to report for duty.

My great-grandfather must have seen plenty of action. He was still a private when he was mustered out with the rest of the regiment on July 15, 1865. (Ninety-five years later, to the day, his great-grandson—that’s me—was born.) After the war, Daniel Huntington lived in Litchfield, a tiny town in Kennebec County. He married my great-grandmother, Almeda Colby Haines, in 1870. They had three daughters and four sons. One of them was my grandfather, Arthur, who was born in 1883 in Richmond. Daniel died in 1918 at the National Asylum for Disabled Volunteer Soldiers in Togus, Maine, and was buried in the Litchfield Plains Cemetery.

My great-grandfather’s enlistment papers, from the Maine State Archives.

My father’s parents, Arthur and Josephine Huntington, are buried in the same cemetery. Arthur died before I was born, but my grandmother—we called her Gigi—was a big part of my life. She watched over us kids during the day after my mother returned to teaching school. When I was young, I would go with my family to the cemetery in Litchfield to put flowers on my grandfather’s grave. Gigi’s name was on the stone, too, along with her birth year. The year of her death remained blank. My grandmother was very matter of fact that she would be under that stone one day and the missing year would be filled in. I remember wandering around the cemetery and seeing another tombstone with the name Huntington. I realize now that it must have been my great-grandfather’s. Gigi must have known that it was her father-in-law, but I can’t recall her ever mentioning it.

I went back to Litchfield recently. It was a cold and breezy November morning, the sun yellow and anemic in a partly cloudy sky. I found Litchfield Plains Cemetery easily enough. It was on a fairly flat plain in front of the Baptist Church. A Civil War monument stood among some trees by the main road, the Union soldier on the top staring resolutely northward, his back to the graves. There was nothing fancy about this burial ground, just irregular rows of tombstones of all shapes and sizes, but nothing particularly ostentatious. Some were old and some were fairly recent. The cemetery didn’t so much end as it petered out at the edge of a field that stretched off towards some woods.

By now my grandmother’s stone had both dates on it. She died in 1991. Daniel Huntington’s grave was not too far away from hers. His tombstone was much larger than the one over his son and daughter-in-law. “Daniel T. Huntington,” it read,

His wife, my great-grandmother, is buried with him. She died in 1929.

A few days before my visit I learned that someone who is very much within the scope of my book is also buried in Litchfield Plains Cemetery. Andrew Tozier was the color bearer for the 20th Maine during the fight for Little Round Top at Gettysburg. Tozier was one of the three-year men of the 2nd Maine who refused to fight after the rest of the regiment returned to Maine when their two years were up. He and the other mutinous men were transferred to the 20th Maine, where the regiment’s new colonel, Joshua Lawrence Chamberlain, had to handle them. He dealt with them fairly, and almost all of the recalcitrant men returned to duty. 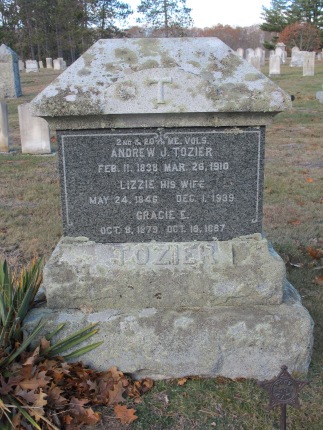 On Little Round Top, Tozier supported his flag in the crook of his elbow while firing a musket at the attacking men of the 15th Alabama. Chamberlain recalled getting a glimpse of him through the whirling clouds of smoke, “defending his sacred trust in the manner of the songs of chivalry.” Chamberlain employed Tozier for a time after the war, and lobbied to get him the Medal of Honor, which he received in 1898. Tozier died in Litchfield in 1910. Did he know my great-grandfather? It makes sense that two Civil War veterans with connections to the same tiny Maine town might have been acquainted. They certainly would have had a lot to talk about, if either one of them cared to talk about the war. Maybe Daniel Huntington attended Tozier’s funeral, unaware that eight years later it would be his turn to be lowered into the ground of Litchfield Plains Cemetery. And he certainly had no idea that his great-grandson would pay him a visit almost a century after that.