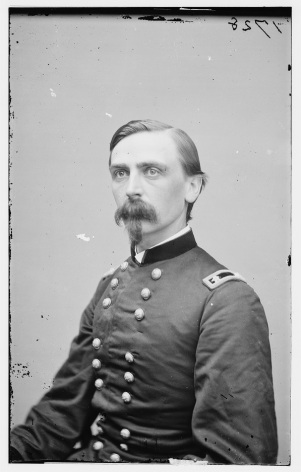 Adelbert Ames, the first colonel of the 20th ME, was the man responsible for turning the regiment into an effective fighting force. Born in Rockland, Maine, on October 31, 1835, Ames grew up around the wharves and docks of Rockland harbor. In the fall he would go duck and goose hunting with his father and older brother. “He was immensely proud of his home State, with its cold trout streams, granite-based salmon rivers and forests full of virgin timber,” wrote his daughter, Blanche.

Ames graduated fifth in his West Point class of 1861 and was assigned to 5th United States battery, commanded by Captain Charles Griffin. At First Bull Run, Ames received a serious wound in his thigh. Unable to stand or ride a horse, he refused to leave his guns. He directed their fire while sitting on the ground, and had to be helped to his feet to sit on a caisson when his battery shifted position. His men placed Ames in an ammunition wagon for the Union retreat. Ames later received the Medal of Honor for his actions at Bull Run

In August 1862, Ames received orders to take a leave of absence, return to Maine, and take command of a new infantry regiment, the 20th ME. He earned a reputation as a strict disciplinarian while he whipped his green regiment into shape. “Col. A. takes the men out to drill,” wrote Tom Chamberlain, “and he will d—n them up hill and down. I tell you, he is about as savage a man you ever saw . . . . I swear the men will shoot him the first battle they are in.” When the men of the 20th Maine finally understood the harsh realities of combat, though, they came to appreciate the lessons Ames had taught them. In May 1863, shortly before the Battle of Gettysburg, Ames was promoted to command of a brigade in the XI Corps. His second in command, Lt. Col. Joshua Chamberlain—Tom’s older brother—received command of the regiment.

Ames was the great-grandfather of writer George Plimpton, who once wrote about a time when he visited the White House while John F. Kennedy was president. Kennedy asked him if he could do something about the letters Plimpton’s grandmother kept writing to him. The grandmother was Blanche Ames, and she had been incensed by a passage about her father in young Senator Kennedy’s Profiles in Courage. Kennedy had written that when Ames served as a Reconstruction governor of Mississippi, “His administration was sustained and nourished by Federal bayonets.” Blanche wanted Senator Kennedy to rewrite that passage for subsequent editions. Young Kennedy had written back that he doubted there would be any more editions. But there were, and Blanche Ames continued to write her letters, even after Kennedy became president. Kennedy wondered if Plimpton could do something to stop the correspondence—“it was cutting into the work of government,” the president said.