The 17th Maine passed June 30 in the Maryland town of Taneytown, and were even mustered in to receive their pay. That afternoon they marched to Emmitsburg, a town that apparently did not share the pro-Union sympathies that men had experienced earlier. “It has never fallen to my lot to see such a malignant set of countenances,” said Pvt. John Haley.

“I should not be surprised if we begin the month of July with a fight,” Lt. Charles Mattocks wrote in his journal. “We are now close upon the enemy, and I somewhat think there will be a few guns fired July 1st.”

On the night of June 30, XI Corps commander Oliver Otis Howard was about to go to bed at his headquarters at a Jesuit college in Emmitsburg when he received a summons from Maj. Gen. John Reynolds, who commanded one wing of the army, consisting of the I, III, and I Corps. He wanted Howard to meet him at Moritz Tavern, where Reynolds had stopped for the night. It was about six miles away, near Marsh Creek. Howard and his brother Charles found Reynolds in a small farmhouse that was nearly empty of furniture. “General Reynolds was a tall, vigorous man of quick motion and nervous temperament,” Charles Howard recalled. “That night he was somewhat paler than usual and seemed to feel anxious or at least to keenly alive to the responsibility resting upon him.”

There was one table in the room where they talked, and it was piled with maps and messages. The two generals went through the dispatches from headquarters and discussed the possibilities of battle. Howard left around eleven. He recalled thinking that Reynolds seemed depressed, almost as though he had received a foreshadowing of what was going to happen the next day. Back at his headquarters, Howard got only about an hour’s sleep before an orderly woke him with orders, directed to Reynolds, about the army’s movements. The I and XI Corps were told to move north to Gettysburg.

We are only days away from the 155th anniversary of the Battle of Gettysburg. It’s interesting to take a look at what Maine soldiers were doing on this date 155 years ago. The Army of the Potomac had been making some brutal marches as it made its way north in pursuit of the Army of Northern Virginia. Many soldiers realized that a major battle was imminent.

On June 29, 1863, Maj. Gen. Oliver Otis Howard and his XI Corps reached the Maryland town of Emmitsburg, just south of the Pennsylvania border, after a “wearisome” march of some 20 miles on a rainy day over muddy roads.

When the 16th Maine, part of the I Corps, finally staggered into Emmitsburg on June 29, it had traveled 40 miles over the previous 26 hours. Fortunately for the exhausted men, their march of June 30 was just a short one, and they established a camp just north of Emmitsburg.

The 17th Maine, which belonged to the III Corps, established its camp on June 29 outside the Maryland village of Taneytown, where the locals treated the soldiers like a combination of conquering heroes and sideshow attractions. “Ladies and young girls distributed beautiful bouquets of flowers to the officers and soldiers; groups of fair damsels, bewitchingly posted in conspicuous places, sang patriotic airs, as the ‘boys in blue’ marched by, and the passage of troops being a novelty, the citizens turned out en masse,” recalled Edwin Houghton. “Long after tattoo, groups of ladies and gentlemen were promenading through our camps, actuated by a curiosity to see how soldiers really lived in the ‘tented field.’” 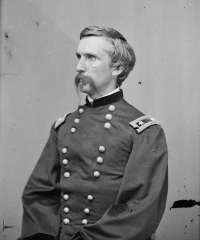 Like so many regiments in the Army of the Potomac, the 20th Maine of the V Corps made a series of exhausting marches as it followed Robert E. Lee toward Pennsylvania. On the morning of June 29 its still-untested colonel, Joshua Chamberlain, began leading his men north from Frederick. Sgt. Charles Proctor of Company H was carrying the regimental flag, but he had managed to acquire enough liquor to get belligerently drunk. He began spouting abuse at some of the officers, who took the flag away from him. Members of the rear guard had to hold Proctor up to keep him on his feet. They finally gave up and left him behind.

Andrew Tozier took Proctor’s place as color bearer. Tozier, then only 24, had already led a difficult life. Born into poverty in Monmouth, he had fled to a life at sea to escape an alcoholic and abusive father, and then he joined the 2nd Maine. He was badly wounded and taken prisoner at Gaines’ Mill, but returned to the regiment after his parole. Tozier was one of the mutinous men that Chamberlain had to discipline when they were transferred to his regiment. But he was now the senior sergeant, so the honor of carrying the regimental flag fell to him.

The 19th Maine belonged to the II Corps, and the regiment made its longest march of the campaign, 32 miles, on June 29, but was able to spend the next day relaxing and basking in the patriotic sentiment it found in the aptly named Uniontown, Maryland.

On June 29 Capt. George D. Smith of the 19th Maine told Edwin Burpee, “I think we are on the eve of a terrible battle and I feel that I shall be killed or wounded.” He was wounded on July 2 and died in the predawn hours the next day. Smith was eventually buried at Gettysburg’s National Cemetery.