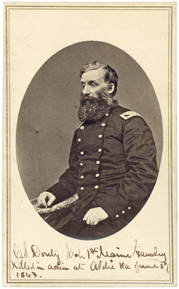 Col. Calvin Douty led the 1st Maine Cavalry at Brandy Station. He was killed on June 17 at Aldie. 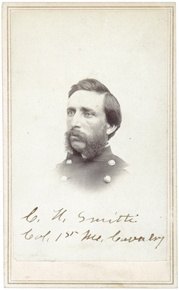 June 9, 2018, is the 155th anniversary of the Battle of Brandy Station, the largest cavalry battle in North America. It was also the battle where the 1st Maine Cavalry felt that it “earned its spurs.” This excerpt from Maine Roads to Gettysburg tells a bit about the Maine horsemen’s experiences in June 1863.

The 1st Maine received orders to move out on June 8. Dust clouds visible in the distance showed that the Rebels were moving, too. The Maine horsemen bivouacked in the vicinity of Kelly’s Ford on the Rappahannock. That evening, the officers received an invitation to brigade commander Judson Kilpatrick’s headquarters. “General Kilpatrick loved a good, social time almost as well as a fight,” recalled Capt. Charles Ford of Company K. When the Maine officers arrived, they saw a mysterious object covered by a poncho near Kilpatrick’s tent. An aide whipped the poncho aside to reveal a vessel filled with whiskey punch. Realizing there were always “honorable exceptions” to their pledges of temperance, the Maine Puritans unbent enough to pass an hour of toasts, songs, and speeches. When it came time for the 1st Maine to offer a toast, an officer raised his glass and said, “Here’s hoping we will do as well at Brandy Station to-morrow as we are doing at the whisky station to-night.” Kilpatrick proclaimed it the best toast he had heard all evening.

Dawn had broken by the time the Maine cavalry finally saddled up and moved out on June 9. As they waited for their turn to cross the Rappahannock, they could hear artillery from somewhere upriver. Once across, they broke into a gallop down forest trails, the thudding hooves sending up clouds of dust that coated the whole command. Suddenly the horses emerged from the woods into a large field. In front of them was “a grand, moving panorama of war,” a chaotic confusion of charging horsemen and flashing sabers. “It was a scene to be witnessed but once in a lifetime, and one well worth the risks of battle to witness,” said regimental historian Edward Tobie. It was, in fact, the largest cavalry action to take place in North America.

The battle of Brandy Station had opened to the north—the sounds of firing earlier that morning had come from the area around Beverly Ford, where Brig. Gen. John Buford’s Federal cavalry division had surprised the Confederates in the predawn hours. They sent the Rebel cavalrymen dashing back in the direction of Fleetwood Hill, the eminence above Brandy Station where Jeb Stuart had his headquarters. The battle continued through the morning. Stuart managed to recover and rally, only to be surprised again by the sounds of battle to his south: Gregg’s division, including Kilpatrick’s brigade, had finally entered the fight.

Kilpatrick sent his first two regiments, the 2nd and 10th New York, charging forward toward the tracks of the Orange & Alexandria Railroad and Fleetwood Hill beyond. They collided with Rebel cavalry under Brig. Gen. Wade Hampton, and came reeling back. If Kilpatrick had been nourishing dreams of winning glory and promotion on this field, they were rapidly fading. He displayed considerable agitation when he rode up to the 1st Maine and its commander, Col. Calvin Douty. “Colonel Douty, what can you do with your regiment?” he demanded.

“I can drive the rebels to hell,” Douty replied. He ordered his men forward.21

“Oh, it was grand!” wrote Tobie, “and many a man who was in that charge has at times fancied that if he were allowed to choose, he would say, ‘Let me bid this world good-by amid the supreme excitement of a grand, exultant, successful cavalry charge like this!’” As they galloped across the field, the Maine cavalrymen could see a little house on the hill, with an artillery battery in front of it. They headed in that direction, driving the enemy before them. The Rebels, Kilpatrick reported, “could not withstand the heavy saber blows of the sturdy men of Maine.”

On the other side of the railroad, the Maine men smashed into the 4th Virginia. Amid the dust clouds, sabers slashed, small arms cracked, horses whinnied, and men cursed. The Rebels broke and fell back. The 1st Maine regrouped and renewed its charge, energized by the frenzy of battle. The riders reached the top of the hill, charged past the battery there, and galloped so far that Rebel forces began to regroup in their rear. Douty had become separated from his men in the fight with the 4th Virginia, so Lt. Col. Charles H. Smith took charge of reforming the regiment and readying it for a dash back to safety. The Northerners wheeled their horses and fought their way through the reformed enemy lines. At one point Smith was leading his men directly toward the battery they had charged beyond, and he could see the enemy gunners frantically reloading. At the last minute, Smith and his men veered sharply to their right, and the battery’s fire tore through empty air. The regiment made its way back to its own lines, but with a loss of some 46 killed, wounded, and missing.

After a long day of combat, Union cavalry chief Alfred Pleasonton was satisfied with what he had accomplished, and he sent orders for his forces to withdraw around five o’clock. He had not defeated the Rebel cavalry, which had fought tenaciously after its unpleasant surprise, but he had demonstrated that the Union cavalry was now a force to be reckoned with. Lt. Colonel Smith believed the battle marked the 1st Maine Cavalry’s “christening” because it marked “the first time it was ever solidly engaged, and the first time it had ever tasted, in any satisfactory manner, the fruit of victory.”