The battery’s monument on the Chambersburg Pike (Tom Huntington photo).

To celebrate the publication of Maine Roads to Gettysburg, I am going to kick off a series of blog posts highlighting the monuments to Maine units and soldiers who fought at Gettysburg. As Selden Connor, formerly of the 7th Maine, said at the 1889 gathering of veterans to dedicate the monuments, “In proportion to the number of her troops in the action, no one of the eighteen states whose regiments flew the stars and stripes on this hard-fought field contributed more than Maine to the victory. At whatever point the battle raged, the sons of the Pine Tree State were in the melee.” You can provide a good overview of the three days of fighting by telling the stories about Maine at Gettysburg and connecting the dots.

So let’s do that. I will start with a Maine unit that was in the thick of things on the morning of July 1, 1863: The 2nd Maine Battery, under the command of James A. Hall of Damariscotta.

As I write in the book, “Capt. James Hall and the 2nd Maine Battery had no idea what the day had in store for them when they left Marsh Creek with the rest of the I Corps early on the morning of July 1. Hall, a stolid-looking 27-year-old redhead with a bushy walrus mustache and hazel eyes, had entered service with the battery as a lieutenant back in November 1861. He advanced to command when the unit’s original captain, former Maine adjutant general Davis Tillson, was promoted. On July 1 Hall had six three-inch ordnance rifles in his battery, with 127 men and officers reporting for duty.”

Hall reported personally to Maj. Gen. John Fulton Reynolds, who posted the battery in an advanced position along the Chambersburg Pike to shell Confederate artillery to the west. Hall wasn’t happy to have his guns so exposed, and his fears were soon justified when Rebel troops appeared on his right, rising up from the unfinished railroad cut. With their infantry support falling back, Hall and his battery were forced to make a fighting retreat.

“The boys fought like the d____ never better,” Hall later told John Hodsdon, Maine’s adjutant general. “You may judge when I tell you that many of our horses were not shot but bayoneted that it was a close and desperate struggle for our guns two of which they actually had hold of at one time. I have seen hard fighting before and been badly smashed up, but I never saw a battery taken from the field and its guns saved in so bad a state as the Old Second came off that day.” 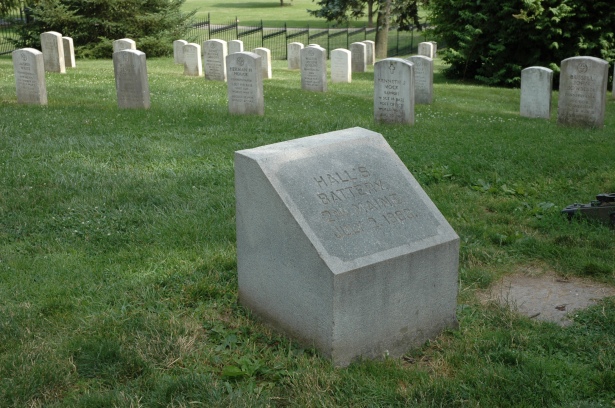 The battery’s main monument in on the Chambersburg Pike, where it fought on July 1. There’s a smaller position marker on Cemetery Hill, where it fought on the afternoon of July 2, until the recoil from a shot shattered an axle and the battery had to move back to make repairs.

Maine Roads to Gettysburg is available for purchase now! You can find it on Amazon.com, or any fine bookseller near you.