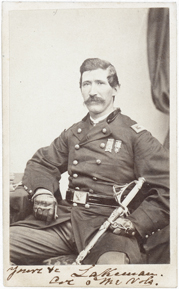 Moses B. Lakeman, commander of the 3rd Maine, was a fighter. A Boston native and the nephew of Hallowell’s mayor, Lakeman joined the 3rd Maine as the captain of Co. I. “Lakeman is a gallant officer, deserves such credit for his exemplary behavior, and should make an excellent Colonel, Lieut. Col. or Major,” said his division commander, David Birney. “He has energy, and great decision of character.” Lakeman did rise to take command of the 3rd Maine and his regiment fought in Pitzer’s Woods and in the Peach Orchard at Gettysburg.

Perhaps it was the stresses of war, but documents in Lakeman’s service record at the National Archives indicate that Lakeman had a problem with drinking. In October and November 1863 Lakeman’s behavior led to court-martial proceedings on charges of being drunk on duty, habitual drunkenness, and conduct unbecoming of an officer and gentleman. On one occasion, Lakeman had gone to Birney and asked to visit army headquarters to locate a deserter. He used the pass to attend a horse race instead, “and did publicly boast that he had fooled or deceived the said Major General Commdg 1st Division 3d Corps.” On another occasion Lakeman, while drunk, had taken umbrage when Lt. Col. Edwin Burt, in acting command of the regiment, had sent out a detail in compliance with orders he had received. Lakeman felt Burt was usurping his position. Lakeman loudly declared that Burt did not “run this machine, and that he, Moses Lakeman did,” and loudly proclaimed that Burt “is a damned, damned, damned, God-damned son of a bitch.” Furthermore, Burt said, Lakeman had made faces at him whenever the Lt. Col. looked in his direction.

It appears the charges didn’t stick, for Lakeman remained in his position. He was wounded during the fighting around the North Anna River on May 23, 1864. (Edwin Burt had been killed in the Wilderness on May 6).

That did not end Lakeman’s troubles with alcohol. On September 8, 1864, he was arrested at a theater in Baltimore. The 3rd Maine, its three years of service over, had been mustered out in June, so it’s not clear what Lakeman’s status was at that point. But the acting provost marshall who made the arrest said Lakeman was using “abusive and threatening language” against Maj. Gen. Lew Wallace (the Union commander at the Battle of Monocacy in Maryland and future author of Ben-Hur). According to the charges, Lakeman said, “‘God damn him’ (pointing with his hand at the General) I can whip him for $50. They make Major Generals now from Politicians.’” While under arrest, Lakeman—apparently sobering up—expressed his regrets and said he did not remember using such language. The arresting officer released him after Lakeman promised to call on Wallace and apologize.